Several years ago (maybe ten) I bought a broken Casio PT-1 synthesizer at a yard sale for a few bucks. It’s a tiny little thing, about thirteen inches by four by one and a half (13″ x 4″ x 1.5″). 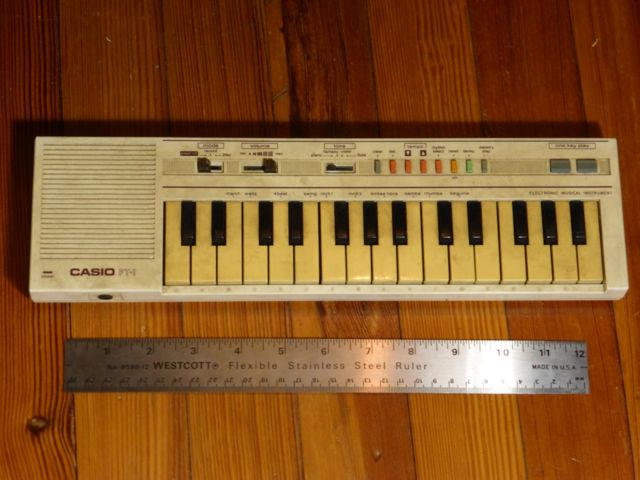 Back then I was looking for a keyboard I could throw in a backpack for on-the-go composing. This one was the right size, but it didn’t work out, being slightly broken – and not much of a keyboard to begin with – but I kept it around for parts or even eventual repair.

Well, I don’t really need a portable keyboard anymore – there’s an app for that now! But I still had that old PT-1 kicking around in the basement…

…then, this weekend, I came across some YouTube videos of Adam Savage (of Mythbusters, and quite a movie prop replica fanatic apparently) making and weathering faux-antique storage cases for some of his objets d’art. Kind of a boring thing to put on YouTube, honestly – I’d rather see him scratchbuild a prop replica than make a plywood box – but it’s still sort of cool, because he’s obviously enjoying the hobbycraft of starting from raw materials and ending with a seemingly antique and well-traveled box that, as he says, “tells a story”. I can dig it.

Meanwhile, lately I’ve been researching vintage (i.e. 1970s) analog synthesizers for an unrelated purpose, and also idly wondering what kind of Steampunk prop I could whip up this year. I didn’t want to just make a ray-gun from lamp parts, fun as that can be.

Anyway, last night all these ideas came together in my mind with an audible click! and I decided to modify the PT-1 into some kind of portable faux-Victorian steampunk synthesizer, in the process ideally fixing the dead keys and rebuilding the synthesis circuitry to include a bunch of cool new filters and modulators and a miniature modular synthesis patch bay….

Whew, okay, so this is looking like one of those…how shall I put it? One of those “open-ended” projects which can consume any amount of time, from an afternoon (for a non-working hacksaw-and-hotglue version) to a lifetime (for the “perfect” version, with etched brass plates and vintage sourced switches and whatnot). Since I have extremely limited free time for this project, I’ll have to take it in bite-sized stages.

First, the keyboard needed a quick inspection. I did that last night, April 14, 2014, to relax after finishing my taxes. 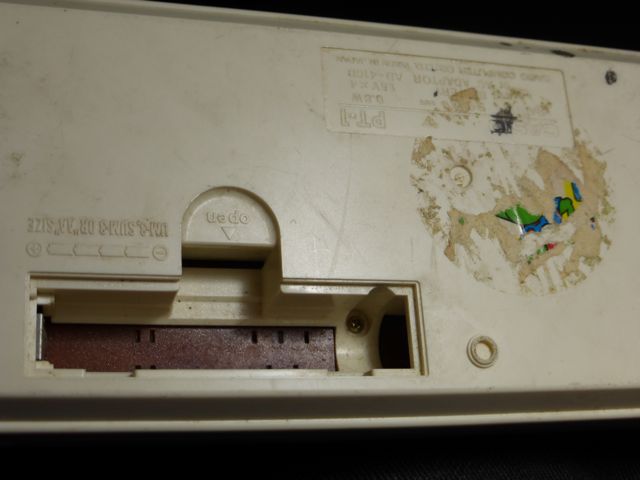 No battery door. No other visible damage inside or out. About five keys don’t seem to work. Sound is not great, and only some of the controls/modes seem to work well, but it’s not a fair test because I used batteries that were probably pretty low. I’m charging fresh ones now and that may improve the performance of the circuitry, but there may be buttons (outside the keyboard) that aren’t working. 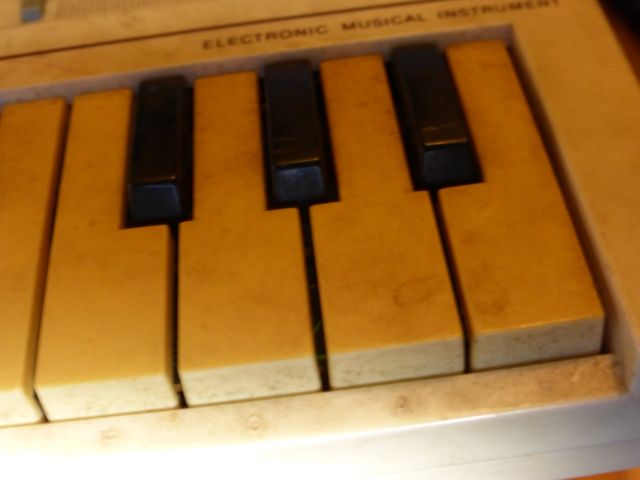 The keys are amazingly yellowed and very dirty. I’m acutely conscious of the fact that I’m crafting a pseudo-antique “artifict”, and I’m very tempted to leave the natural patina of filth in place. The keys are pre-weathered by actual decades of disuse! I’d be crazy to clean that off, just to fake it back on later when I get to weathering. Right?

Right, except it’s genuinely filthy. The keys are gritty to the touch. I can’t stand touching the keys, and that’s not my intention here. I want to end up with a musical instrument I can bear to play! They’ll still be yellowed. With a heavy heart, I wiped off most of the dirt with a damp paper towel. (Just the keys. I’m ignoring the case for now.)

Disassembly is just taking out some screws, no prying or breaking required, yay! Workings are pretty simple. Slicone dome keypads look okay, no gross repairs needed. (Sometimes the graphite conductor pads wear out; apparently they can be re-coated with pencil graphite, liquid circuit pen, or glued foil. But if the dome itself is torn, good luck.)

The keyboard’s mechanics include the case, not just the keys and circuit board, but the use of the case is minimal: top and bottom felt bumpers at appropriate positions. If I want to mount the keyboard in a different case I could replicate that layout pretty easily. The circuit board that runs the keys is 11″ wide, so what I’d really like is a little wooden case (like you can often get with even a pretty cheap set of art supplies) that’s 11″ wide inside, to build this into. A used art box would be ideal. At lunchtime today I’ll check Goodwill, the Center for Creative Reuse, and Construction Junction (where I have to go anyway to get some dead batteries recycled). 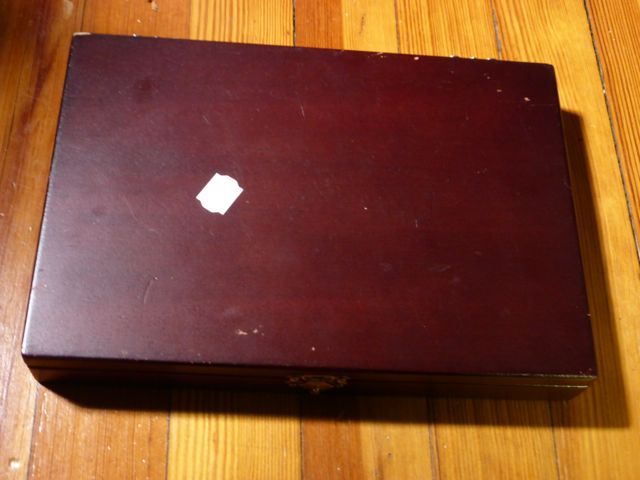 …Okay, back from shopping. Sure enough, Goodwill had just exactly the kind of box I wanted, a timeless little jewelry box or something, for three bucks…except it’s about one inch too narrow. The inside width is 10″, not enough for the main circuit board, though it’s a perfect fit for the keyboard keys themselves. 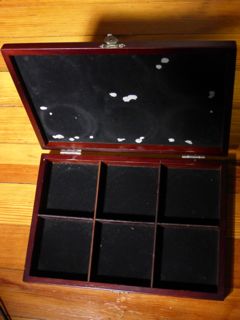 …So perfect, in fact, that I’m convinced to make it work somehow despite the overlong circuit board. I don’t know how I’m going to do that. I’d really rather not trim the board shorter and patch the cut-off traces with jumper wires, but few enough traces would be damaged that it might be worth the hassle. The obvious alternative is to patch in a whole new set of microswitches beneath the keys. I have some little tiny pushbuttons that would probably work…but I don’t think I have, let’s see, 29 of them. Maybe I could cut holes for the ends of the board and cover them with greeblies.

Meanwhile, batteries are charged. The back of the case goes back on to hold them in, so I can do some electrical tests with the keys out and the shell taped closed. Pressing each contact with just one silicone dome’s black pad, noises are made. It looks like all the bad keys have one trace in common…which logic suggests is likely the bad trace (or leads to a bad connection or component) somewhere on the board. Almost time to pull out the multimeter. This trace is near the too-long edge of the board. Perhaps a sign that I should trim it: I can’t make this trace any worse. I’ll probably have to patch it to fix those keys, so why keep the original which is in my way? …Maybe.

I’m thinking I could gain some width by mounting the board in slots I cut in the box sides. They wouldn’t go all the way through so I’d still need to do some trimming, but I might gain a third of an inch or so. It would also provide some structural stability, and it’s not hard, so I’ll probably do it. 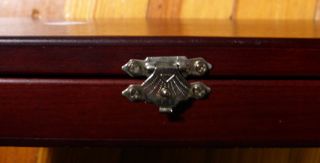 Next I looked over the box a bit more closely, and took off the price tag. The clasp and hinges are already perfect – I was afraid I would have to replace them with more old-fashioned ones. Nope. Maybe a bit of weathering later, but the box is already weathered for real so I’m inclined to mostly leave it alone.

Pulling a few of the box’s dividers loose was easy, and a quick test-fit of the keyboard shows how awesome this is going to look, and how far along the project is already. I could finish a non-working hot-glued version in a few hours, if I cared to. (But I’m aiming higher, and have no particular timeline.) 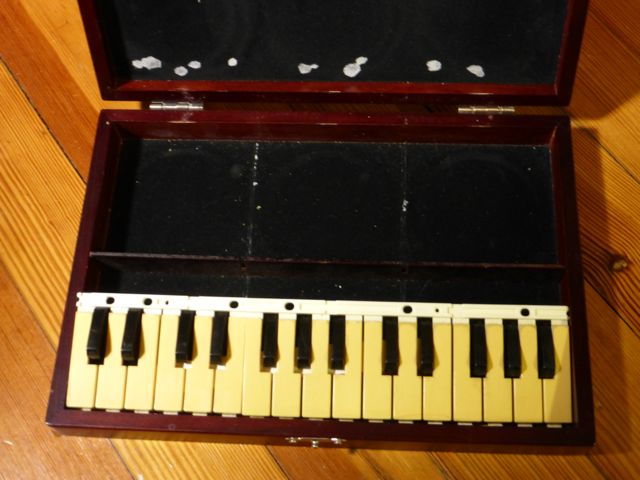 …And I think that’s enough progress for one update. Stay tuned!